A fender bender morphs into an unexpected battle with lung cancer 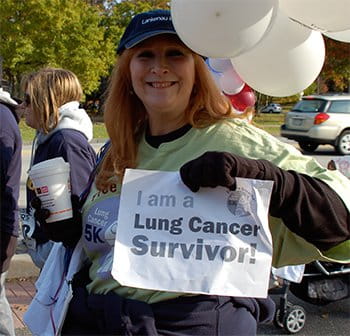 Marlin Killen hadn’t been expecting to be told she had lung cancer. Or any cancer at all.

“I had been in a car accident; I was rear-ended by a truck, and my neck wasn’t getting better,” she recalls. “I had been to physical therapy, but it still wasn’t healing very well.”

Concerned, she made an appointment with her primary care doctor, who referred her to Angela D’Orsi, MD, at Lankenau Medical Center. During the appointment, Killen shared the MRI’s that had been performed immediately following the accident with Dr. D’Orsi, who passed them on to a radiologist she worked with frequently. Killen thought nothing of the exchange.

The next morning, Killen’s phone rang.

“She told me that the radiologist saw something on the film that seemed to be a little unusual and needed to be checked out. When you get a call from your doctor at 7:00 in the morning telling you something’s unusual…you have to take action,” she says.

Though she assumed it was nothing, Killen followed up with a series of appointments with her primary care doctor and radiologists, eventually ending up in the office of pulmonologist and Lung Cancer Program Director Thomas Meyer, MD, at Lankenau. After biopsies and treatment ruled out tuberculosis and a number of other lung infections, Dr. Meyer diagnosed Killen with Stage 1 lung cancer.

Killen, who had never been a smoker, was surprised, but ready for the fight of her life.

“I knew that it was serious and I was in for a fight. I knew that there were going to be ups and downs and rights and lefts and everything, but I had a chance of winning this fight, and this was someone who was going to be my partner, and I knew that he was up for the challenge,” she says.

Killen’s treatment began almost immediately; she understood that she was fortunate to not have been diagnosed at a later stage, and wanted to improve her chances for survival as soon as possible. Approximately two weeks after her diagnosis, thoracic surgeon Ned Carp, MD, performed a full thoracotomy to remove the cancer from Killen’s lungs. The procedure was done on a Tuesday. By Saturday, Killen was back at work.

Though Killen was familiar with Lankenau as a ‘great’ hospital, it wasn’t until she was diagnosed with cancer that Killen realized the kind of exceptional care that was available in her community.

“Every single member of the Lankenau team was outstanding, and what was so impressive was that they didn’t just call it a team, they all actually acted like a team. Everyone’s voice was just as important as everyone else’s. Unless everyone was comfortable with my discharge, I didn’t leave. Everyone’s input and opinion that mattered. That’s an exceptional team,” she says.

Today, Killen is proud to be 10 years cancer-free. In between spending time with her family and teaching psychology at Drexel University, she has become a lung cancer ambassador and worked with the American Lung Association and the Pennsylvania chapter of Free to Breathe, including volunteering at their annual ‘Free to Breathe 5K’ fundraising event. She knows that she’s one of the lucky few who manage to survive—and thrive—after a lung cancer diagnosis.