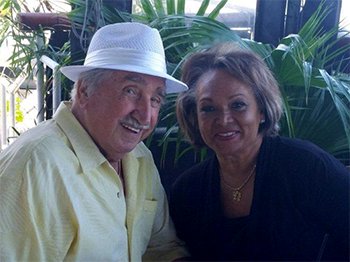 When Michael Herskovitz woke up one morning feeling dizzy, he thought nothing of it.

She went to the computer and began looking up what his sudden dizziness could mean, and her research led her to suspect a stroke. Concerned, she drove Michael to the emergency room at Lankenau Medical Center, a hospital that the Bala Cynwyd couple had visited many times before, including for Michael’s heart valve replacement in 2006.

“Normally, Michael is a tough guy. He doesn’t really complain about things. When he wasn’t stable enough to stand that morning, I knew something was wrong, but when they hooked him up to the heart monitor, we could all see it,” says Tonya.

“Mike has been a patient of Dr. Shapiro’s for years, so we immediately called him. He came right over and consulted with us, and told us that he thought Mike would fare well with a pacemaker.”

Other than his earlier heart valve replacement, Herskovitz, 87, led a healthy, active, lifestyle and was used to being independent and doing things on his own, including attending synagogue and conducting lectures multiple times per week about his background as a Holocaust survivor.

With his active lifestyle in mind, Dr. Shapiro recommended Herskovitz to take part in the study of a new Leadless pacemaker being trialed at Lankenau by electrophysiologist Douglas Esberg, MD.

Despite being nervous about the surgery, Herskovitz was eager to be the first Lankenau candidate.

“I thought, ‘Why not give this a shot? It will help me, and many people coming up behind me.’ It looked like the doctors were even happier than I was to have the first person to try it,” he says.

Just hours after his initial arrival at Lankenau, Herskovitz had the pacemaker implanted and was recovering comfortably. After an evening spent overnight in the Heart Pavilion, Lankenau’s newest building devoted completely to cardiac care, he was discharged and permitted to return home.

Within 24 hours of his being admitted to the hospital with worrisome and potentially fatal symptoms, Herskovitz wasn’t just feeling better, he was feeling great. That afternoon, Herskovitz and Tonya went to dinner, a meal he said he enjoyed without being distracted by any pain.

Of course, it’s not just Herskovitz who’s pleased with the results of his mini-pacemaker. Dr. Esberg, Dr. Shapiro, and the rest of his care team are impressed, too.

“Michael was an excellent candidate for the Leadless pacemaker because he needed a pacemaker in only one chamber of his heart,” explains Dr. Esberg. “Anyone who needs a single chamber pacemaker is a candidate for this type of technology, and seeing how much it has benefited Michael’s quality of life is encouraging.”

“The doctors are all amazed and say that Michael is doing so well,” says Tonya.

Michael continues to visit Lankenau for follow-up appointments but, so far, his doctors are impressed with his progress. That feeling, says Tonya, is mutual.

“We’re from the area, but we’ve been continuing to go to Lankenau for years because we’re so happy with the care. Everyone in that hospital is like a group of cheerleaders. You don’t want to be in the hospital, but if you have to be, that’s the place to go.”