Bringing Ellie into the world safely following a diagnosis of cholestasis 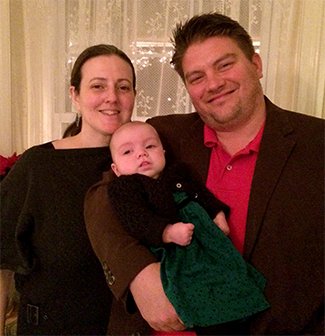 For Maureen Armstrong, DO, it was clear where she wanted to deliver her baby. An internal medicine resident at Lankenau Medical Center, she knew the hospital had a great reputation for maternity care, and how easy it would be to schedule her frequent ob/gyn appointments at the same spot she spent so many hours during the week. However, it wasn’t until her third trimester that Dr. Armstrong and her husband realized just how much they’d come to rely on and appreciate the Lankenau staff.

“I had gestational diabetes, but besides that everything was going well,” recalls Dr. Armstrong. “Then my hands and feet started itching like crazy. I was doing some research online, and I found out that what I had was called cholestasis. It wasn’t really an issue for me other than the itching, but it increased the baby’s risk of being stillborn.”

An appointment with her ob/gyn, Katy Doroshow, DO, confirmed her diagnosis. Though Dr. Doroshow had suggested waiting until the 37-week mark for an elective Cesarean section or induced labor, Dr. Armstrong’s blood work suggested a more imminent solution. Her liver enzymes and blood pressure had increased, and she was found to have protein in her urine. Within 24 hours of her precautionary visit with Dr. Doroshow, Dr. Armstrong was induced. Her labor did not progress so she had to have a semi-emergent Cesarean section. She was 35 weeks pregnant.

Ellie Catherine was born on August 29, 2014, and admitted to the NICU shortly after.

“She was 7 pounds, 5 ounces when she was born. She was a giant amongst all the other babies in the NICU, and that was the hard part,” says Dr. Armstrong. “Just by looking at her, you’d think she was fine and healthy, and the nurses kept telling us that was the hardest part.”

Although Dr. Armstrong was discharged from the hospital a few days after giving birth, Ellie remained in the NICU. Her breathing was steady, but NICU nurses had noticed she was reluctant to eat as much or as often as she needed to. During her 18-day stay in the NICU, a speech pathologist worked with Ellie and her parents to improve her appetite and showcase tactics that would entice the newborn to eat.

Dr. Armstrong and her husband visited every day to monitor their daughter’s progress. Though it was hard for them to leave each time, they knew Ellie was in good hands.

“We were so impressed by the level of care, compassion, dedication, and professionalism that extended throughout our entire stay in the NICU. I could rattle off the names of the NICU nurses that touched our lives through Ellie’s stay, but in all honesty: the entire staff was incredible,” says Michael Oldfield, Dr. Armstrong’s husband.

Finally, after what seemed like an eternity to her parents, Ellie was released from the NICU. Today, nearly three months after she was born, Ellie is healthy and will always have a special connection with the Lankenau NICU nursing staff.

“At this point, I would consider most of the NICU staff family friends, and we can’t wait to bring Ellie to visit them now that she is home and settled,” says Michael. “I didn’t know what to expect, but Lankenau has been the finest operation I’ve ever seen, and I’m thrilled to be a part of it, even in the role of ‘Dad’.”