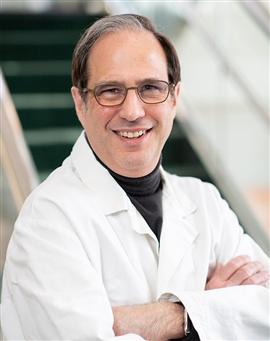 
Research interests include: immune escape in cancer and control of the neoplastic potential of primordial germ cells.

Dr. Alexander Muller is exploring fundamental molecular and genetic interactions that exist between tumors and the host environment as the basis for developing novel approaches for achieving effective therapeutic intervention. In particular, his studies focused on a pair of related enzymes IDO1 and IDO2.

IDO1, the more widely studied of the two, normally has an important role in protecting the developing fetus from the mother’s immune system. Dr. Muller’s research has been at the forefront of the rapidly developing conceptual paradigm that targeting protective immune regulatory mechanisms such as IDO1 can be an effective strategy for improving cancer treatment

Dr. Muller and colleagues published the first sound genetic demonstration of IDO1’s importance in promoting tumor progression in mouse models of skin cancer, lung cancer and the lung metastasis. Furthermore, they uncovered surprising evidence of how remarkably broad the impact of IDO1 is in shaping the fundamental characteristics of tumor promoting inflammation, driving not only immune escape but also the formation of new blood vessels required to feed growing tumors.

Dr. Muller’s work on IDO1 as a cancer target has led to the first clinical testing of an IDO-inhibitory drug in cancer patients, and is opening new avenues to improve the treatment for a wide spectrum of malignancies as well as previously unrecognized indications such as retinopathies. Additionally, exploratory work in collaboration with the Danish company IO Biotech has generated intriguing preclinical evidence to support the development of IDO1-directed vaccines as a next-generation approach to achieve antitumor responses.

Being of host origin, cancer cells are particularly difficult targets for the development of cytotoxic agents that are sufficiently selective to avoid severe side effects in patients, and the therapeutic window for such agents is generally narrow. Tumors are also remarkably resilient in their ability to rebound from such treatments. Even when the vast majority of cancer cells are killed by a cytotoxic agent, a small number of residual cells can be sufficient to seed the regrowth of a tumor.

Furthermore, as a consequence of the genetic plasticity that is characteristic of cancer cells, the regrown tumor may no longer respond to previously successful therapy, having developed resistance in response to selective pressure. Thus, successful cancer treatments may require multiple agents targeting different mechanisms similar to the approach used against highly mutable infectious agents such as HIV. Because tumors are absolutely dependent on interactions with the host for their growth and survival, the host/tumor interface may be a particularly attractive point of vulnerability.

Inflammation and immunity are two interrelated aspects of the host environment that play a fundamental role in cancer establishment and progression. Inflammation has long been known to have the capacity to promote cancer, though what distinguishes tumor-promoting inflammation has been an open question. A properly directed immune response appears to be one of the most promising means of controlling cancer, as exemplified by the recent success of “immune checkpoint” agents, yet there remains a great deal of room to improve on the frequency of responses.

IDO1 is a metabolic enzyme that is activated by inflammatory signals and which, through degradation of the essential amino acid tryptophan, shapes an inflammatory environment that tolerizes immune responsiveness. And as Dr. Muller’s group recently discovered, IDO1 promotes new blood vessel development. Those effects on the inflammatory environment are important for maintaining pregnancy, where IDO1 has been shown to be physiologically relevant, but are detrimental when inflammation-driven IDO1 promotes malignancy.

Dr. Muller and his colleagues were the first to show that targeting IDO1 with small molecule inhibitors can produce an adjuvant effect that enhances various therapies. Several pharma companies are now in the clinic testing such modalities in patients.

1) IDO1 as a nodal pathogenic driver of tumor promoting inflammation. Increased tryptophan catabolism by IDO1 has been associated with a broad spectrum of cancers and is implicated in the pathophysiological process of tumoral immune escape. We initially reported that IDO1 expression is negatively regulated by the Bin1 anti-cancer gene and that inhibiting the IDO1 enzyme can leverage the efficacy of cytotoxic chemotherapy. We have subsequently identified several structural classes of IDO1 inhibitory compounds and confirmed their potential utility through in vitro and in vivo target validation studies.

While it is now well established that IDO inhibitors can produce immune-based antitumor responses, how this occurs continues to be an area of active investigation. IDO1 has been suggested to be a means by which tumors might escape immune surveillance. However, in the context of the classical DMBA/TPA skin carcinogenesis model, Dr. Muller’s team found IDO1 to be induced by the inflammatory tumor-promoting process itself, independent of tumor immunoediting.

Furthermore, loss of IDO1 did not exacerbate the severity of inflammation as might be expected if it were simply immunosuppressive. Rather, IDO1 appears to be integrally involved in shaping the inflammatory environment to support tumor outgrowth. These findings add to a growing body of evidence suggesting that IDO is a key element shaping the pathogenic nature of the chronic inflammatory environment.

In a recent series of studies, Dr. Muller’s team has reported that mice lacking IDO1 are resistant to both KRAS-induced lung adenocarcinomas and pulmonary breast carcinoma metastases. Unexpectedly, blood vessel density was significantly diminished in the lungs of Ido1-nullizygous mice. Elevation of the inflammatory cytokine IL6, which was associated with tumor outgrowth in the lungs in both models, was greatly attenuated in transgenic mice lacking Ido1, consistent with in vitro evidence that IDO1 activity markedly potentiates IL6 production. MDSCs (myeloid derived suppressor cells) exhibited reduced T cell suppressive activity when isolated from tumor-bearing animals lacking IDO1 that could be rescued by ectopic production of IL6 in the tumor cells. IL6 production could likewise reverse the pulmonary metastasis resistance exhibited by Ido1-nullizygous mice.

Subsequently, Dr. Muller’s group has published evidence of a previously unrecognized role for IDO1 in supporting neovascularization, the abnormal blood vessel formation that supports tumor growth. Mice lacking IDO1 exhibited reduced neovascular density in lung metastases as well as in the non-tumor setting of oxygen-induced retinopathy (OIR). This effect of IDO1 resulted from its counteracting the anti-angiogenic activity of the inflammatory cytokine IFN, which is a major driver of IDO1 expression. Further studies implicated the inflammatory cytokine IL6 as a downstream mediator of IDO1’s pro-neovascular effect, as loss of IL6 resulted in similar decreases in neovascularization that were IFN dependent. Importantly, the resistance to lung metastases exhibited by mice lacking IDO1 appears to be predominantly due to its ability to support neovascularization.

Those findings fill a conspicuous gap by providing fundamental genetic proof of concept for IDO1 as a therapeutic target. Furthermore, the interpretation that IDO1 acts as an integrative inflammatory modifier linking immune escape and neovascularization to promote the establishment of a pathogenic, tumor-promoting environment represents a major conceptual breakthrough regarding IDO’s role in cancer.

2) IDO2 polymorphisms as predictive markers of treatment response in pancreatic cancer. Pancreatic ductal adenocarcinoma (PDAC) develops into a lethal disease that has remained refractory to treatment including recent advances in cancer immunotherapy. Heritable genetic variations can affect the inflammatory tumor microenvironment, which can ultimately impact cancer susceptibility and clinical outcomes.

Dr. Muller, in collaboration with investigators at Thomas Jefferson University and LIMR, has obtained genetic evidence from mice and humans that IDO2, also an immunometabolic modifier, contributes to the development of PDAC. This observation is particularly noteworthy because of the high prevalence of two IDO2 inactivating single nucleotide polymorphisms (SNPs) in human populations. The presence of these SNPs affords the opportunity to carry out loss of function studies directly in humans, and given the evidence of IDO2’s involvement in PDAC development, further evaluation was carried out regarding how the functional disruption of IDO2 might impact treatment outcomes.

In a retrospective clinical analysis of PDAC patient data, the biallelic occurrence of either of two inactivating polymorphisms in the IDO2 coding region suggested a trend toward favorable disease-free survival. Notably, subset analysis revealed a striking association of IDO2 inactive status with improved disease-free survival in patients receiving specific therapeutic interventions. IDO2 genotype analysis thus has the immediate potential to influence the PDAC care decision-making process through patient stratification. In the longer term, agents targeting IDO2 may be beneficial to those patients with active IDO2 genetic status who do not respond well to therapy.

3) IDO1 as a target for next-generation tumor vaccine development. A particularly intriguing finding with regard to IDO1 has been the observation that humans exhibit MHC class I restricted, cytotoxic T cell reactivity against IDO1-expressing cells. IDO1 reactive T cells are found not only in cancer patients, where pathophysiological elevation of IDO1 has been frequently noted, but even in healthy individuals. This finding implies the existence of a T cell-mediated, counter-regulatory mechanism directed against IDO1. The results from initial clinical studies employing a peptide-based vaccine approach to harness this anti-IDO1 response for the benefit of cancer patients have thus far been encouraging. However, there is a pressing need to establish preclinical models for investigating the underlying basis of the anti-IDO1 response in order to inform treatment optimization.

To develop a surrogate mouse model to mimic the observed MHC I-restricted response to human IDO1 peptides, computer algorithms were used to rank peptides. H2d restricted peptides were specifically queried to be compatible with the Balb/c strain based, CT26 colon carcinoma model, selected based on high levels of IDO1 expression and responsiveness to IDO1 inhibition reported for these tumors. A subset of these peptides was found to be capable of stimulating IFN production in a recall response assay. Prophylactic vaccination of mice with each of the peptides produced varying degrees of growth suppression against CT26 tumors, which unexpectedly did not directly correspond with their effectiveness in the recall response assay. Therapeutic treatment of established CT26 tumors with a combination of peptide vaccine and anti-PD-1 antibody treatment produced a combinatorial anti-tumor response beyond what was achieved with either agent alone. Studies into the underlying nature of the IDO1-directed, anti-tumor response are currently ongoing.

As noted initially in humans, the results of these ongoing studies demonstrate thus far that mice are capable of mounting an effector T cell response against IDO1, confirming that this endogenous protein is somehow excluded from normal tolerance mechanisms. Initial findings that IDO1 peptide-derived vaccines can elicit effective anti-tumor responses confirms the utility of mouse tumor models for further exploration and refinement of this novel approach to IDO1-directed cancer therapy.

Dr. Muller’s work has been supported by grants from the DOD Breast Cancer Research Program, Susan G. Komen, and the Concern and W.W. Smith Foundations, and he is the recipient of ongoing research support from IO Biotech. Dr. Muller is also a Co-Investigator on NIH-funded consortium grants between LIMR and Bryn Mawr College to develop pharmacologically superior IDO inhibitors and between LIMR and Thomas Jefferson University to study the role of the related enzyme IDO2 in pancreatic cancer.