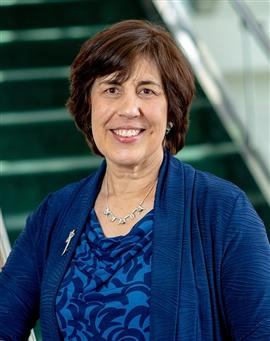 
Dr. Gilmour is defining mechanisms by which tumor modifiers, such as polyamines and thrombin, support and accelerate the development of cancer to a malignant, metastatic state. She is also investigating how polyamines recruit mutant stem cell populations to promote the early development of tumors. She is translating these basic research findings into novel polyamine- and thrombin-targeted therapies that can contribute to increased survival in cancer patients.

For more than 30 years, Dr. Gilmour’s research has focused on mechanisms by which polyamines support and accelerate the development of cancer to a malignant, metastatic state. Because polyamines impact so many biological processes, her research has spanned many areas of cancer research, including the development of novel polyamine-based anti-cancer chemotherapeutic approaches, chemical carcinogenesis, signal transduction, histone acetylation and chromatin remodeling, angiogenesis, wound healing, inflammatory processes, and stem cell biology.

Dr. Gilmour is recognized for her characterization of the role of polyamines in promoting tumor development using various transgenic mouse models and polyamines as modifiers of the immune response in tumorigenesis. Using a wide variety of murine tumor models, she has characterized novel polyamine-based anti-cancer chemotherapeutic approaches. Over the past 10 years, she has broadened her studies of tumor modifiers to include thrombin inhibition. The overriding goal is to translate these basic research findings to novel polyamine or thrombin-targeted therapies that can contribute to increased survival in cancer patients.

Polyamines (putrescine, spermidine and spermine) are ubiquitous, small molecules that are essential for all cell growth and proliferation. Their cellular content is highly regulated in normal cells, but their dysregulation contributes to many disease states. Alterations in polyamine metabolism are both necessary and sufficient in driving human disease, particularly cancer, metabolic diseases and degenerative disorders. Compared to normal cells, the levels of polyamines are dramatically increased in tumor cells due to the tumor’s robust dependence on polyamines for growth and survival. This has made the polyamine pathway an attractive target for growth inhibition and for the development of potential novel therapeutic strategies. Dr. Gilmour is elucidating mechanisms by which polyamines promote cancer by acting on the immune response, new blood vessel development (i.e., angiogenesis), and tissue-regenerating cells (i.e., stem cells).

Both polyamines and thrombin modify cancer cells to drive the development of malignant and metastatic tumors. Thrombin is an enzyme in blood plasma that causes the clotting of blood by converting fibrinogen to fibrin. Thrombin is generated as the result of a cascade of coagulation factors. Many of these coagulation factors are increased in tumor cells, resulting in the generation of thrombin and increased thrombotic complications (pulmonary embolism and blood clots) in cancer patients. Unfortunately, the incidence of cancer-associated thromboses is also increased by treatment with chemotherapeutic agents commonly used to treat malignant cancers. In addition, thrombin can drive cancer progression directly through the activation of protease-activated receptors and platelets or indirectly by generating fibrin matrices.

Polyamine-recruitment of mutant stem cells in skin cancer: Dr. Gilmour has demonstrated that increased polyamine levels activate a kind of tissue remodeling that is normally seen during wound healing and that promotes cancer development. That is, she has demonstrated that polyamines play a causal role in tumor development. The Gilmour lab has discovered that elevated polyamine levels stimulate recruitment of stem cells from their stem cell niche in the bulge area in the skin. If these cells harbor mutations, then this mobilization of stem cells can lead to the development of skin tumors.

This NIH-supported project investigates the mechanism by which polyamines promote the development of skin cancer following in utero exposure to trace levels of the carcinogen arsenic. Exposure to arsenic via the drinking water is a widespread and major public health problem; indeed, exposure to even low levels of arsenic can lead to various cancers, including skin cancer. Although epidemiological association between chronic arsenic exposure and skin cancer is strong, the mechanisms contributing to arsenic-induced cancer remain elusive.

To identify targets for new therapeutic interventions to prevent and/or treat arsenic-induced inflammation and skin cancer, Dr. Gilmour has developed a novel animal model. Her studies using transgenic mice have shown that if a pregnant mouse drinks water laced with trace amounts of arsenic, her progeny have a higher incidence of developing skin tumors as adults. This work is important because areas of the United States have relatively high levels of arsenic in their drinking water as the result of arsenic leaching out of bedrock into water reservoirs. More importantly, this research will also illuminate how polyamines promote early stages of cancer development.

Polyamine-targeted therapies: Dr. Gilmour’s lab is testing a novel therapy to starve tumors of polyamines; the therapy involves blocking the synthesis of polyamines and the polyamine uptake system that brings polyamines from outside of the tumor cell into the cell. They recently demonstrated that this novel approach to polyamine depletion suppresses tumor growth in a T cell-dependent manner, highlighting a poorly appreciated role of polyamines as strong modulators of antitumor immune responses.

In addition, ongoing preclinical studies in collaboration with Dr. Otto Phanstiel at the University of Central Florida are investigating new polyamine-containing drugs that selectively enter and kill tumor cells in a “Trojan horse” approach. Supported by a DOD Idea Award, the Gilmour lab is investigating to what extent a polyamine-targeting drug can selectively target and kill cancer stem cell populations in melanoma tumors and possibly reverse the ability of tumor-infiltrating macrophages to make melanoma tumors resistant to chemotherapy drugs.

Use of thrombin inhibition in cancer therapy: The incidence of intravascular coagulation and potentially lethal blood clots increases with cancer progression and is associated with poor prognosis. It is thought that thrombin may directly contribute to cancer spread.

The Gilmour lab is conducting preclinical studies to examine the anti-tumor effect of a new oral thrombin inhibitor, dabigatran etexilate (Pradaxa). Using two mouse models of tumor metastasis (breast cancer and ovarian carcinoma models), the Gilmour lab has found that co-treatment with dabigatran significantly increases the anti-tumor and anti-metastatic activity of low doses of standard chemotherapeutic agents. Dr. Gilmour is investigating possible mechanisms for this synergistic tumor inhibition with dabigatran and a cytotoxic chemotherapeutic agent. Results from their studies suggest that dabigatran may be useful in not only managing thrombotic complications frequently associated with malignancy, but also in preventing tumor growth and metastasis.

Dr. Gilmour’s research has been supported by NIH funds for more than 25 years. She has also received multiple additional grants including those from the U.S. Department of Defense, Boerhinger Ingelheim Pharmaceutical, W.W. Smith Charitable Trust, and the Sharpe-Strumia Research Foundation.

Dr. Gilmour is looking ahead to test 1) if her polyamine-blocking therapy can enhance the anti-tumor efficacy of standard chemotherapeutic drugs and/or new cancer immunotherapies, and 2) therapeutic strategies using new anticoagulants (“blood thinners”) to block the spread of cancer.