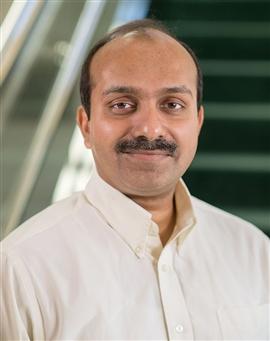 
Dr. Thomas specializes in translational research, which applies scientific findings to medical practice. During his career in immunology, he has developed numerous therapeutic and diagnostic techniques and has been awarded several patents for his groundbreaking work. Dr. Thomas modeled the membrane protein (M) of SARS-CoV-2 and showed that it functions as a sugar transporter, and he modeled the transmembrane non-structural proteins of SARS-CoV-2. He is the editor of several books, including a popular two-volume set called Vaccine Design: Methods and Protocols (2016). A fully rewritten and supplemented second edition, consisting of three volumes, was published in 2022.

Translational science is a discipline within biomedical and public health research that aims to improve the health of individuals and communities by translating findings from basic research studies into diagnostic tools, medicine, procedures and education.

Dr. Sunil Thomas specializes in translational science. With a strong and varied background in microbiology, immunology, molecular biology and cell biology, he has developed diagnostic tools and vaccines for disorders that afflict millions of people every year.

Dr. Thomas is investigating whether Bin1antibody could provide protection against colitis. It has been demonstrated that Bin1 is a genetic modifier of experimental colitis that controls the paracellular pathway of transcellular ion transport regulated by cellular tight junctions. Dr. Thomas has discovered that Bin1 antibody can exert drug-like properties in an animal model. He is part of a team that is in a Phase 1 clinical trial for a medication to treat colitis using an innovative immunotherapy technique.

Alzheimer’s disease (AD) is a progressive, neurodegenerative disease that afflicts primarily the elderly. Characterized by a progressive loss of memory and intellectual ability, AD affects more than 44 million people worldwide and is projected to increase to 135 million people by 2050. Unfortunately, there are no medications to prevent onset or to cure those living with the disease.

In recent years, the human gene Bin1 has emerged as one of the most important genes in affecting the incidence of sporadic AD. Dr. Thomas is part of a team that is exploring whether anti- Bin1antibody could act as a drug to treat AD.

Dr. Thomas also has developed several diagnostic techniques. He was responsible for the development of molecular and immunological kits for the detection of sandal spike phytoplasma. He was the first to develop an ELISA kit to quantify lipid rafts in T cells, a technique is widely used today in immunology laboratories.

Dr. Thomas also pioneered the development of the Eastern Blotting technique to detect post-translational protein modifications. The technique paved the way for developing diagnostic probes for the detection of Ehrlichia, an intracellular bacterial pathogen in humans and animals. The probes developed were also used to elucidate the exit mechanism of Ehrlichia.

Additionally, he was part of a team that discovered the monoclonal antibody IDO (clone 4B7), which is currently being marketed as a diagnostic probe for immunohistology in basic cancer research.

Looking ahead, Dr. Thomas is interested in developing immunotherapies for ulcerative colitis and Alzheimer’s disease, and he will be involved in development of vaccines for infectious diseases.

Dr. Thomas’ lab focuses on the translational studies to develop immunotherapies for various diseases. Current interests include the development of Bin mAb for the protection of ulcerative colitis and Alzheimer’s disease. Dr. Thomas also is interested in studying the uptake mechanism of antibodies into cells. Animal models will be used to study molecular and immunological underpinnings during immunotherapy.