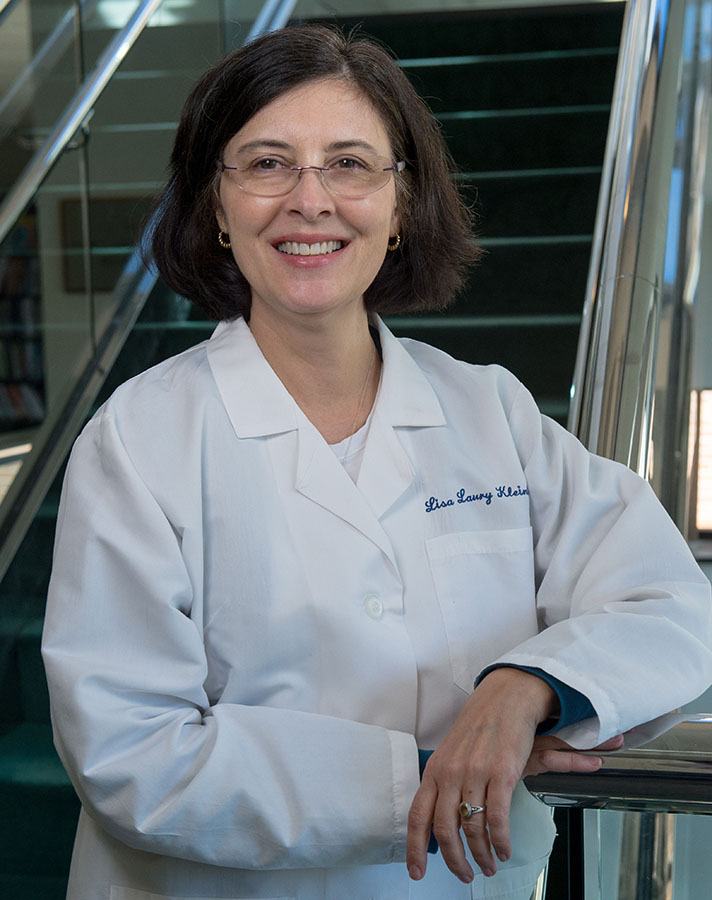 
Dr. Laury-Kleintop has more than 20 years of experience in molecular biology and in developing antibody-based assays. She studies how cells respond to stress signals, an interest that has helped bring a new understanding to the development of cardiovascular, autoimmune, ocular and kidney diseases, as well as therapeutic approaches for these disorders.

Lisa Laury-Kleintop’s research focuses on the role that specific modifier proteins play in cardiovascular-associated diseases such as atherosclerosis and cardiac hypertrophy; autoimmune disorders such as rheumatoid arthritis and lupus; ocular diseases such as macular degeneration and diabetic retinopathy; and chronic kidney disease. She is working not only to understand the mechanism of action for these molecules, but also to devise new therapies that could benefit millions of disease sufferers.

More Americans than ever are taking cholesterol-lowering drugs. Indeed, among those ages 40 to 59, 17 percent take such medication, as do almost half of those aged 75 and older, according to the U.S. Centers for Disease Control and Prevention.

RhoB: Of the medications that lower cholesterol, statins are the most commonly prescribed. Statins limit vascular tissue damage following heart attacks and during atherosclerotic plaque formation. Dr. Laury-Kleintop is exploring how RhoB, a small GTPase altered by statins, modifies cell signaling events. She demonstrated that loss of RhoB function reduces the stress responses of vascular smooth muscle cells that mediate plaque formation in atherosclerosis. Her ongoing work focuses on RhoB as a potential drug target, and she is part of a team that has patented an antibody against RhoB.

Bin1: Despite preventative and therapeutic treatment strategies to reduce cardiovascular disease, abnormal alterations of the heart tissue can ultimately lead to heart failure. Work coordinated by Dr. Laury-Kleintop has demonstrated the role of a protein called Bin1 in the negative remodeling that leads to heart failure in preclinical models. Specifically, loss of Bin1 expression in cardiac myocytes leads to dilated cardiomyopathy with reduced cardiac function. Current work focuses on therapeutic approaches to reverse the negative remodeling, thus restoring heart function.

The National Institutes of Health estimates that approximately 23.5 million Americans suffer with symptoms due to an autoimmune disease, such as type 1 diabetes mellitus, rheumatoid arthritis and lupus. These individuals also have an increased risk for developing cardiovascular disease.

Mediation of stress responses: Dr. Laury-Kleintop is investigating the role the RhoB protein plays in driving inflammatory signals leading to autoantibody-mediated autoimmune diseases. The team discovered that a RhoB-targeted biomolecule reduces autoantibody levels in preclinical models of rheumatoid arthritis and lupus. The results point to a potential therapy not only for rheumatoid arthritis and lupus but also for other autoantibody-mediated autoimmune diseases, such as diabetes and myasthenia gravis. Current efforts focus on preclinical validation in autoimmune disease models; development of other targeted therapeutics; and defining the role of this protein in immune system cells, with the goal of advancing this novel therapeutic approach into clinical practice.

About 11 million Americans suffer from age-related macular degeneration (AMD), and the number of vision-threatening cases of diabetic retinopathy (DR) is expected to reach 56 million worldwide by 2030, according to the BrightFocus Foundation.

Dr. Laury-Kleintop and her team demonstrated the potential benefit of blocking RhoB’s actions in these and other ocular disorders. Their antibody against RhoB inhibits the development of abnormal blood vessels that lead to the loss of vision by compromising the retina or more specifically, the central portion of the retina called the macula, critical for central-focused vision and commonly seen in wet AMD.

Approximately 37 million U.S. adults have chronic kidney disease — and nine out of 10 don’t know they have it, according to the U.S. Centers for Disease Control and Prevention.

Dr. Laury-Kleintop and her collaborators devised a diagnostic reagent that can be covalently linked to a detectable label or immobilized to a substrate for the identification and quantitation of a portion of the RhoB protein.

This method enables the detection or measurement in the urine sample (or from a protein profile generated from a biologic sample) of RhoB protein or peptide fragments. Comparing and monitoring the level of RhoB protein or peptide in a patient’s urine or blood sample may enable the diagnosis of kidney diseases, or the identification of risk for developing those disorders. It may also enable clinicians to monitor the progression or remission of kidney diseases.

In collaboration with Drs. George Prendergast, Laura Mandik-Nayak and Alex Muller, Dr. Laury-Kleintop has developed antibodies against tryptophan catabolism, immunomodulatory enzymes, IDO1 and IDO2. The antibodies targeting IDO1 and 2 were developed to characterize expression patterns of IDO enzymes in preclinical disease models and as potential therapeutic tools to affect the immune response.