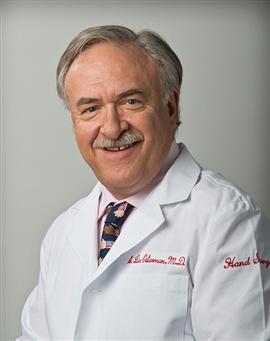 My care emphasizes the traditional laying on of hands , from a careful examination , a scientific and reasoned approach to the patient's problem ,whether surgery or rehabilitation, and a listening ear.

950 Pulaski Drive, Suite 100
King of Prussia, PA 19406
Our apologies. This feature is currently not available for this location.
Please call 800.385.7472 to speak directly with the doctor's office to make the next available appointment.

About A. L. Osterman, MD

Dr. A. Lee Osterman grew up in Wheeling, West Virginia before attending Yale College where he majored in photography. After graduation, he traveled on a Guggenheim fellowship photographing original stained glass in Europe. Subsequent to that, he traveled to Tanzania where he photographed doctors working with the Wagogos and the Masai on an UNESCO project that eventually became a book, Jungle Doctor Panorama. That experience, combined with a family medical background, set him on a course to medical school.

He spent the next 10 years of training at the University of Pennsylvania where he did his medical school, orthopaedic residency and hand fellowship with Dr. F. William Bora. It was in his first few weeks in the anatomy lab that his realized his future passion. “The most human part of a cadaver is its hand.” The only time away was an internship at Mt. Sinai Medical School in New York City where he met his future wife, Elissa Topol, and a microvascular fellowship with Dr. Jim Urbaniak at Duke University.

He returned to Penn where he became a tenured Associate Professor and where he practiced and taught until 1993. Then the two Philadelphia hand groups from Penn and Thomas Jefferson merged to form The Philadelphia Hand Center, a practice that encompasses the full gamut of shoulder to hand problems, including congenital reconstruction, microsurgery, trauma and adult reconstruction. PHC has a teaching complement of 8 ACGME hand fellows , multiple orthopedic and plastic residents, the Evelyn Mackin hand therapy fellowship ,and international fellows. He divides his time between teaching (not only locally but around the world), writing (he has edited two of the most popular hand surgery texts, Rehabilitation of the Hand and Fractures and Injuries of the Distal Radius and Carpus: The Cutting Edge. as well as authored numerous articles ), and an active clinical practice. He is a Full Professor of Hand and Orthopedic Surgery at Thomas Jefferson University and President of the Philadelphia Hand Center. He has served in many leadership positions in both the American Society for Surgery of the Hand and the American Association for Hand Surgery. He is currently Chairman of the Fellowship Directors and on the AAHS Board. He is Past President of the AAHS and of the Eastern Orthopedic Association. He is on the Editorial board of HAND and Orthopedics Today.